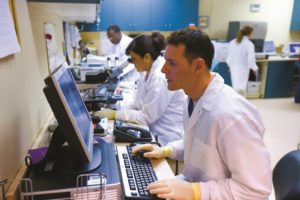 Melanoma is a disease in which malignant (cancer) cells form in melanocytes (cells that color the skin). The skin is the body’s largest organ. The skin has several layers, but the two main layers are the epidermis (upper or outer layer) and the dermis (lower or inner layer). Skin cancer begins in the epidermis, which is made up of three kinds of cells:

There are two forms of skin cancer: melanoma and nonmelanoma.

Melanoma can occur anywhere on the skin. In men, melanoma is often found on the trunk (the area from the shoulders to the hips) or the head and neck. In women, melanoma forms most often on the arms and legs. Being white or having a fair complexion increases the risk of melanoma, but anyone can have melanoma, including people with dark skin.

Risk factors for melanoma include the following:

These and other signs and symptoms may be caused by melanoma or by other conditions. Check with your doctor if you have any of the following:

There are five types of standard treatment. Your OHC doctor will help you determine the best care plan for you.

It is important to know whether cancer has spread to the lymph nodes. Lymph node mapping and sentinel lymph node biopsy are done to check for cancer in the sentinel lymph node (the first lymph node the cancer is likely to spread to from the tumor) during surgery. A radioactive substance and/or blue dye is injected near the tumor. The substance or dye flows through the lymph ducts to the lymph nodes. The first lymph node to receive the substance or dye is removed. A pathologist views the tissue under a microscope to look for cancer cells. If cancer cells are found, more lymph nodes will be removed and tissue samples will be checked for signs of cancer. This is called a lymphadenectomy.

Even if the doctor removes all the melanoma that can be seen at the time of surgery, some patients may be given chemotherapy after surgery to kill any cancer cells that are left. Chemotherapy given after surgery, to lower the risk that the cancer will come back, is called adjuvant therapy.

Surgery to remove cancer that has spread to the lymph nodes, lung, gastrointestinal (GI) tract, bone, or brain may be done to improve the patient’s quality of life by controlling symptoms.

OHC Is Making It Possible to Live Longer With Advanced Melanoma

Melanoma isn’t fair. Especially because it’s almost impossible to go about our daily lives without encountering some...