From Kurt P. Leuenberger, MD, medical oncologist and hematologist at OHC who specializes in gastrointestinal cancers 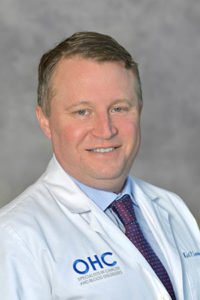 February is Gallbladder and Bile Duct Cancer Awareness Month and OHC is giving patients a fighting chance as the only independent cancer group in Ohio to offer a clinical trial for a new treatment for bile duct cancer.

The good news about gallbladder and bile duct cancer is that they are rare. The bad news is approximately one third of the people diagnosed with these types of cancer are expected to die from them. That’s because they are aggressive forms of cancer that show no symptoms until they have already advanced to late stages. OHC wants to change the outcomes by offering patients early access to a new treatment.

There are no new targeted therapies approved by the Food and Drug Administration for the treatment of bile duct cancer, so clinical trials are critically important. Clinical trials evaluate the most promising new treatments, and OHC has one currently open that is evaluating the use of the investigational drug infigratinib for bile duct cancer. OHC is the only independent cancer group in Ohio to offer patients access to this treatment.

Sometimes cells have a gene that has been altered. This is called a mutation. This mutation can cause cells to develop into cancer. One mutation found in bile duct cancer cells is the fibroblast growth factor receptor (FGFR). Infigratinib is a drug designed to block the FGFRs from doing their work to grow cancer cells. OHC’s participation in the trial will not only help determine its effectiveness, but also provides patients in this region with early access to this promising new treatment.

Cancer treatment has totally evolved from what it used to be. The standard approach was to use chemotherapy to kill the cancer, but it often kills everything around it. Now we have targeted therapies that attack specific mutations and leave the surrounding healthy cells alone. These targeted therapies, as well as immunotherapies, are showing great promise, and at OHC, we want to make them available to all cancer patients.

To learn more about gallbladder and bile duct cancers, click here. For information on OHC clinical trials, or to request a second opinion, click here or call 1-800-710-4674.

Despite the odds for patients diagnosed with a cancerous brain tumor, OHC is offering these patients a fighting chance...

Charlene Crank always took good care of her health. Then, about five years ago, she began having problems related to her...