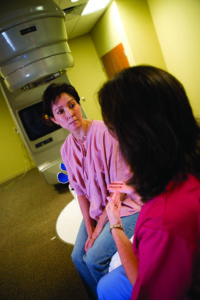 Breast cancer forms in the tissues of the breast, usually the ducts (tubes that carry milk to the nipple) and lobules (glands that make milk). It occurs in both men and women, although male breast cancer is rare.

Some of the risk factors for developing breast cancer include menstruating at an early age, never having given birth or giving birth at an older age, a family history of breast cancer, taking hormones like estrogen for symptoms of menopause, obesity, a lack of exercise, being white and drinking alcohol.

The National Cancer Institute recommends that women age 40 and older have screening mammograms every one to two years. If you are at risk, a mammogram before age 40 is recommended.

At OHC, we believe a multidisciplinary approach is the best way to treat your breast cancer. A multidisciplinary team is a group of clinical professionals with different areas of expertise who create your comprehensive plan of care. They develop the plan together, rather than having you see each specialist individually to give their instructions. There is evidence that the team approach reduces delays in treatment and referrals and improves patients’ emotional well-being.

There are different treatment options available for patients with breast cancer, including new treatments being tested in clinical trials. Some of the most common treatments include:

For more information about breast cancer, call us toll free at 1-800-710-4674. If you are a new patient or would like a second opinion, we’d be happy to schedule an appointment for you with one of our doctors.

A Gift of Memories for a Breast Cancer Patient

Pictured above: Susie Osha (left), Valerie Barrett (right), and fellow KWF recipients were invited to the University of...

According to the American Cancer Society, breast cancer is the most common cancer in American women. A woman is more at...