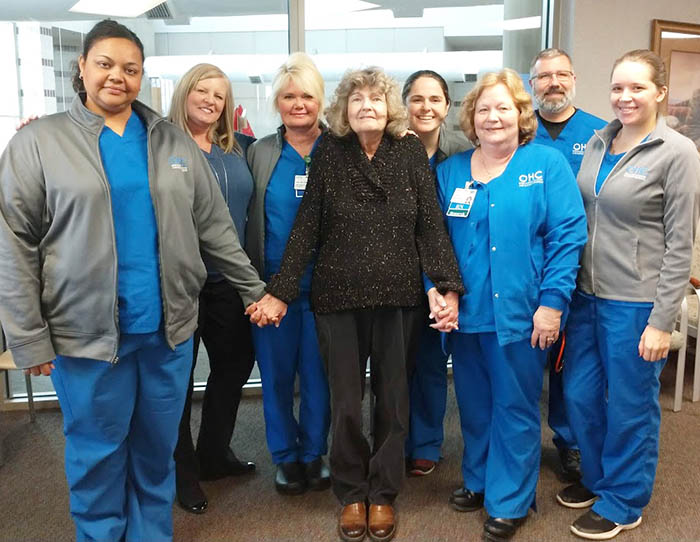 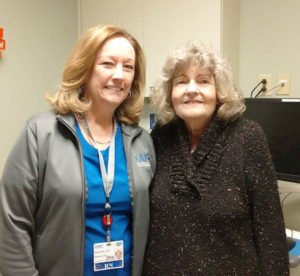 It was July 2004 and Nancy Price was celebrating her 50th birthday with family, friends, and co-workers. Just before her birthday, Nancy’s husband made her promise that she would get a good check-up.

“I thought it was odd,” said Nancy. “There was no real reason for it. He just said it out of the blue. And it was something he really wanted me to do since turning 50. So, I thought about it, and said okay. I had no idea his random request would end up saving my life.”

Nancy made an appointment with her primary care doctor who ordered standard tests including a chest x-ray, which revealed a suspicious spot on her right lower lung. It was cancer. Nancy had surgery to remove the right lower lobe of her lung and seven lymph nodes. Nancy’s doctor explained her options.

“At that time, my doctor was OHC’s Dr. Arthur Richards. He explained that due to my age and my otherwise good health, I had the option to follow up with chemotherapy or not. Honestly, I didn’t know what to do. So, I asked him what would he tell his daughter to do. He said he’d tell her to go for it,” said Nancy. And so, she did.

Nancy had four sessions of chemotherapy. She was sick and exhausted, but was thankful she didn’t lose her hair, which was important to her. “Every year, my husband and I play Santa and Mrs. Claus and I didn’t want to wear a wig,” she explained.

Throughout her treatment, Nancy wanted to share her thoughts about wigs and fatigue and other aspects with the other patients. She wanted to know how they were feeling, what they were going through, ask questions, and offer suggestions. But she didn’t.

“I didn’t talk to anyone because I wasn’t sure they wanted to talk about it. I’m a telecommunications operator so I talk to people all the time, and I wanted to keep doing that, but I didn’t.” That was until later, in 2011, when her cancer returned, this time to the upper right lobe of her lungs.

“This time, I decided to try talking to the other patients, and it turned out they wanted to talk as well. I told them my story and encouraged them to keep fighting, just like I had been doing since 2004. They were so comforting. Eventually, all of us and the staff formed a kind of bond, like a family,” Nancy said.

In 2016, OHC’s Paula Weisenberger, MD, medical oncologist and hematologist, encouraged Nancy to participate in a clinical trial for a new kind of treatment for cancer – immunotherapy. Chemotherapy attacks cancer cells – and nearby healthy cells – directly. Immunotherapy helps the body’s immune attack the cancer, and it leaves healthy cells alone. As a result, it typically causes fewer side effects so patients aren’t so sick.

“In the clinical trial, I was given the drug Opdivo once a month for one year. It was great because it didn’t make me sick, and that meant I didn’t have to miss anything,” Nancy said. “At the end of that clinical trial, another clinical trial opened. This one was testing Opdivo twice a month. They told me there were only 156 people in that trial, and I thought to myself how lucky I was to be one of the 156 to get this medicine now, when I need it.”

“I just had my CT scan last week (November 2019) and my cancer is stable!” said Nancy. “I’m so happy because my lung cancer is now inoperable, but thanks to the clinical trial, the drug has kept it from growing and spreading.”

While others wait for FDA-approval, clinical trials, like those in which Nancy participated, provide patients with early access to the newest, most promising treatments.

“I have so many things to be grateful for. I’m grateful for the wonderful doctors, the nurses, the front desk people, the medical assistants and everyone at OHC. I believe they are agents of God. But I’m mostly grateful that 15 years ago my husband pushed me to get a physical.”