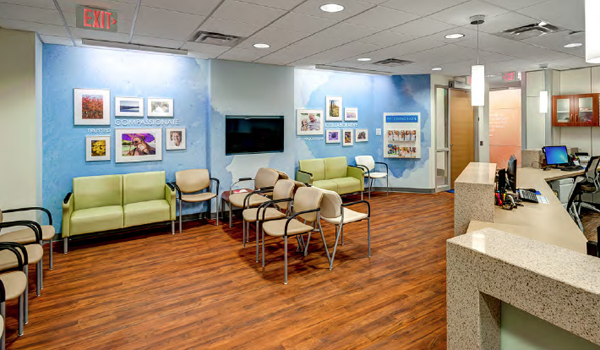 The following is the first in a two-part series on the development of OHC West, OHC’s newest prototype medical office. 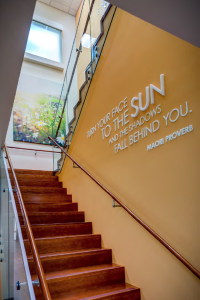 Even OHC’s stairways and elevators are carefully designed to inspire.

OHC’s newest location, OHC West, is a prototype office design which opened in October 2013. With it came an entirely new way of looking at the design and construction of a medical office — through the eyes of its patients.

Upon entering OHC West, patients are immediately struck by the visual differences between this office and those you may have visited in the past. The wide-open reception area features large windows, soothing wall colors, and photos of nature. It is more reminiscent of a living room than a reception area.

OHC Project Manager Al Green says that was by design. In fact, there isn’t any detail inside of the new OHC West office that wasn’t designed with a clear purpose.

OHC approached the layout of this new space differently than what it had done in the past. Green describes OHC West as “patient-centric, but operationally driven.”

Green and OHC project team members spent about six months thinking through the functionality of the space. Nearly every detail was considered, including patient traffic flow, the placement of labs, the types of workspaces for physicians, counter heights, and even the operation of doors.

The goal was to have OHC’s mission — ‘Patients First’ — be clearly expressed in the functionality of the office.

The result is a space that promotes efficiency while giving patients a welcome feeling. Your initial entrance into the office, the reception area, exemplifies this idea well. As mentioned earlier, it is an open area. Chairs and love seats are arranged in a flowing style that promotes conversation. They are not simply placed along the outside walls. 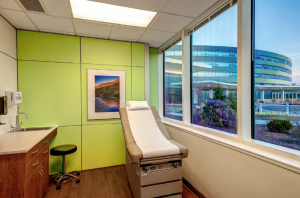 Visitors are welcomed from a lower, desk-height counter that further promotes openness and is more functional for patients in wheelchairs. There is a clear line of sight throughout this entire area, giving the impression that there is nothing to hide. Barriers that typically separate staff from patients, such as traditional counters and reception windows, are nowhere to be found.

After seeing patients, doctors do not retreat to private offices. Instead, physicians can quickly make notes at counter-top workstations in the clinical touchdown area where the examination rooms are located. They can also duck into shared workspaces that are conveniently located off the main hall. This reduces the waiting time for the next patient.

In the clinical touchdown area, patients can easily find and consult with OHC nurse navigators. These professionals are responsible for guiding patients throughout their care continuum.

Optimizing the patient experience drove the design of this prototype oncology facility. And it influenced the placement of our labs, which are separated from the examination and treatment areas. This was done to keep our staff’s traffic from interfering with the flow of our patients.

There are also two labs, one on each floor. Green and his team included the second lab for convenience and to reduce staff traffic (moving to and from what would have been just one lab).

The physical space inside each exam room was also rethought. Designers discovered that the upper cabinets found in most medical exam rooms were simply used for storage. By moving those items to another area, the upper cabinets could be removed. The result was an exam room that has a more open feel.

In Part 2 of this series (next week), we’ll take a closer look at how OHC and its award-winning environmental design team from Kolar Design improved the patient and treatment rooms, as well as the overall aesthetic and mood of the office’s environment.

An Update From OHC’s President, Board Chair and Executive Director

To Our OHC Patients and Their Families, As we continue through the coronavirus situation, our commitment to you, our...

Rodney Fightmaster couldn’t figure out what was wrong. For two years, he felt miserable. He was coughing and having...