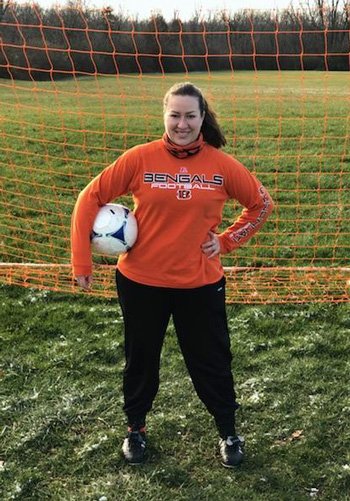 It was April 2014. Kelly Patrick was at her usual hangout: the indoor soccer facility in West Chester, Ohio. She was having a great game, having scored two goals in the first half. Kelly had been playing soccer forever; in high school and college and as an adult, now in her mid-30s. But just as the half was about to end, she felt a sharp pain in her right side. As a self-described “intense player,” Kelly’s immediate reaction was to “shake it off” but the pain was so intense. She knew something was wrong and told her teammates, “I think you better call an ambulance.”

At the hospital, everyone including Kelly was pretty certain it was appendicitis, but they did a CT scan to confirm the diagnosis. But it wasn’t appendicitis. It was a tumor on one of her ovaries. And it was probably cancer.

“The first thing I did was google my condition,” said Kelly. “I’ll never do that again.”

The results of her Google search indicated that there was only a 5% chance of survival for the type of cancer she had. “I thought to myself, ‘I better start putting together my bucket list.’” Kelly was happy to learn the information was inaccurate. After surgery to remove the tumor, Dr. Marcia Bowling, a gynecology oncologist with OHC, told her she had an aggressive cancer, but it was definitely stage 1.

Kelly and her doctors decided they would remove the tumor, plus the ovary and fallopian tube it was near, and her uterus and cervix. They would follow surgery with chemotherapy and radiation therapy as a precaution since the cancer was an aggressive type. “During the planning, Dr. Bowling asked me about children,” explained Kelly who was 35 and had no children. “I decided it would be better to get it all out of my body and be able to live than to leave it in and risk having children who end up without a mom.” 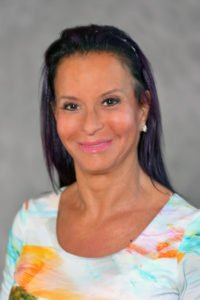 After surgery, Kelly decided she was going to remain positive throughout her journey. She approached her upcoming chemo and radiation treatments like preparation for a soccer game. “In soccer, you have to be healthy and in good shape to beat your opponent. In this case, my opponent was cancer,” said Kelly.

In the time between surgery and her first treatment, she lifted weights, did cardio exercise and ate right. When she was ready to take on her opponent, she added one more tool to her arsenal: her mom.

“My mom was my rock,” said Kelly. “I didn’t know what to expect or how much I would have to depend on her, but I knew I needed her. I wanted her to help me through this.”

So Kelly started her treatments: chemo three days in a row, every three weeks. She wondered how bad it would be. Would she be sick constantly? Would she lose her hair? Would there be pain? What she experienced was nothing like what she had imagined. With each round, she didn’t feel the side effects until about the third day, and they weren’t as bad as she thought. By the fifth day, she would be feeling okay. She attributes this to the nurses. They told her to drink plenty of water and explained that it helps to work the chemo through and out of your system. So that’s what Kelly did, along with daily walks. At one point, Kelly asked if she could play soccer.

“Soccer was something I loved and had done all my life. The nurses said as long as I felt good, I could play, but I wouldn’t be allowed to have a port. I didn’t mind because soccer gave me a sense of normalcy that I really needed,” said Kelly.

After her chemo and radiation treatments were finished, Kelly and her doctors decided to remove her remaining ovary and fallopian tube. “The original idea was to keep the healthy ones to prevent an early risk of cardiovascular disease,” Kelly explained. “But since the type of cancer I had was aggressive and I was okay not having children, we decided together to remove the other ovary and tube.” 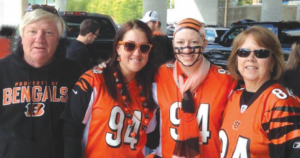 Kelly, third from left, in full “face paint,” didn’t let cancer prevent her from one of her favorite activities: going to a Bengals game with her family.

It took about a year before she started to feel like it was over.

“At first, it feels like a waiting game. With every visit to the doctor, you’re wondering, ‘is it gone’,” she said. “But then my follow-ups went from every three months to every six, and my scans were done annually.”

“I realize not everyone’s journey is the same. Some people have it a lot harder than me. And other people have it easier. Having been through it, I think there are some things that can make it easier or at least a little more tolerable.”

The first thing she says to do is to rid yourself of any preconceived notions you have about cancer.

“Cancer is curable. It’s no picnic, but people are surviving. Just listen to your doctors and nurses. They will help you. They can help with side effects. There are groups that can offer you support. OHC gave me a folder with great information and resources.”

Second, Kelly says if you can, keep doing what you love. “I love soccer and fortunately I was able to continue playing during my ordeal. If you love to knit, then keep knitting. If you love yoga, keep doing your yoga. That thing you love can give you a much needed feeling of normalcy, of what you did and who you were before cancer,” said Kelly.

She also recommends accepting help when family and friends offer. 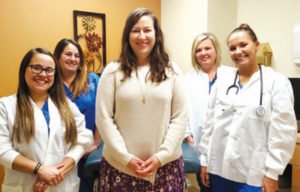 Kelly with the care team at OHC West Chester.

“Let them cook for you. Let them cut your grass. Let them take you for a spa day. I learned that people really do want to help. Some don’t know how, so when they’d ask, ‘Can I do anything?’ I’d say, ‘Yes, you come over and clean my house,’” Kelly said with a laugh. “I felt like this was my free pass to accept help when at other times in my life, I felt like I should be able to do these things.”

Probably the most important thing Kelly recommends is to “find your rock.”

“My mom was my rock,” she said. “She drove me to my appointments. She cooked for me. She let me stay at her house when I needed to. When the chemo started to affect the taste of food, mom would get me whatever I wanted. It wasn’t because I’m spoiled, but because she knew how important it was for me to eat. When food doesn’t taste right, you don’t want to eat, and eating is very important during your treatments. So if I said, ‘Cracker Barrel chicken and dumplings might be good,’ she’d instantly be in the car on her way to Cracker Barrel.”

“I know this was just as hard for her as it was for me,” added Kelly. “I know at times she’d be in her room crying, but she never cried in front of me. She was always positive and supportive. She was always my rock. She still is.”

One response to “Strength and Courage: One Young Woman’s Greatest Opponent”