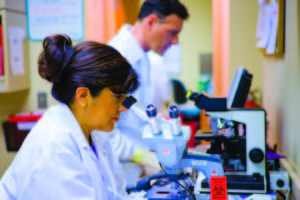 Several factors are associated with an increased risk of endometrial cancer, including obesity, exposure to endogenous or exogenous estrogens, tamoxifen use and certain inherited conditions. You can reduce your risks with physical activity, taking combination oral contraceptives, and having a history of pregnancy and/or breast feeding.

These and other signs and symptoms may be caused by endometrial cancer or by other conditions. Check with your doctor if you have any of the following:

Standard treatments for endometrial cancer include surgery, radiation therapy and hormone therapy. Endometrial cancer can usually be cured. Uterine sarcoma is harder to cure. One of our gynecologic cancer specialists, Marcia C. Bowling, MD, Ajit Gubbi, DO or Dené C. Wrenn, MD, MS, can help you determine the best care plan for you.

Surgery is the most common treatment for endometrial cancer, and in many cases, it can be performed using robotic technology. Robot-assisted surgery is a system that allows your OHC surgeon to make precise, delicate incisions and motions. The robot is never in control and is never making decisions.

The following surgical procedures may be used:

Sometimes additional therapy such as radiation therapy or hormonal therapy may be needed after surgery.