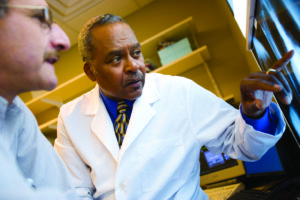 The two most common forms of esophageal cancer are named for the type of cells that become malignant (cancerous):

There are different types of treatment for patients with esophageal cancer. Some treatments are standard (the currently used treatment), and some are being tested in clinical trials. Many people with esophageal cancer find it hard to eat because they have trouble swallowing. The esophagus may be narrowed by the tumor or as a side effect of treatment. Some patients may receive nutrients directly into a vein. Others may need a feeding tube (a flexible plastic tube that is passed through the nose or mouth into the stomach) until they are able to eat on their own.

Your OHC doctor will help you determine the best care plan for you.

Small, early-stage cancer and high-grade dysplasia of the esophagus may be removed by endoscopic resection. An endoscope (a thin, tube-like instrument with a light and a lens for viewing) is inserted through a small incision (cut) in the skin or through an opening in the body, such as the mouth. A tool attached to the endoscope is used to remove tissue.

If you’ve received a diagnosis of esophageal cancer, you want treatment from cancer experts who treat you like a...

According to the American College of Gastroenterology, 60 million Americans report having heartburn at least once a...