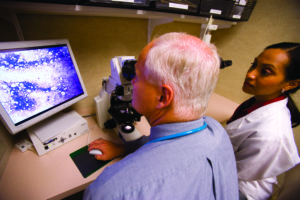 Sometimes there is a problem with the fertilized egg and trophoblast T-cells. Instead of a healthy fetus developing, a tumor forms. Until there are signs or symptoms of the tumor, the pregnancy will seem like a normal pregnancy. Most GTD is benign (not cancer) and does not spread, but some types become malignant (cancer) and spread to nearby tissues or distant parts of the body.

These and other signs and symptoms may be caused by gestational trophoblastic disease or by other conditions. Check with your doctor if you have any of the following:

There are three types of standard treatment. Your OHC doctor will help you determine the best care plan for you.