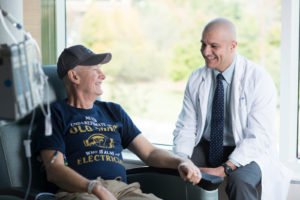 Hodgkin Lymphoma is a cancer that affects the lymphatic system, which is part of the body’s immune system. It results from a change to the DNA of a lymphocyte, a type of white blood cell. If untreated, it results in the uncontrolled growth of cancerous lymphocytes.

Hodgkin Lymphoma is one of the most curable forms of cancer.

Treatment for Hodgkin lymphoma includes chemotherapy and/or radiation, depending on individual patient factors. Stem cell transplantation is also a treatment option, as well as Chimeric Antigen Receptor (CAR) T-cell therapy, one of the most exciting and promising cancer treatment breakthroughs in recent years.

For most people who have Hodgkin lymphoma, the exact cause is not known, but the following risk factors may increase a person’s likelihood of developing Hodgkin lymphoma:

These and other signs and symptoms may be caused by adult Hodgkin lymphoma or by other conditions. Check with your doctor if any of the following do not go away:

Patients with Hodgkin lymphoma should have their treatment planned by a team of doctors with expertise in treating lymphomas. Your OHC doctor will help you determine the best care plan and team members for you.

There are three standard treatments used for Hodgkin lymphoma: