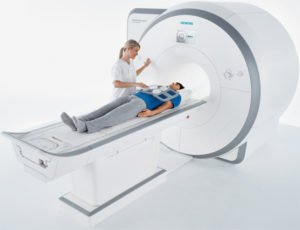 Glioblastomas (GBM) are malignant Grade IV tumors where a large portion of tumor cells are reproducing and dividing at any given time. They are generally found in the cerebral hemispheres of the brain, but can be found anywhere in the brain. They are nourished by an ample and abnormal tumor vessel blood supply.

Glioblastomas may arise “de novo,” meaning they begin as a Grade IV tumor with no evidence of a lower grade precursor. De novo tumors are the most common form of glioblastoma. They tend to be more aggressive and tend to affect older patients. Alternatively, secondary glioblastomas may progress from a lower-grade astrocytic tumors (Grade II or Grade III) and evolve into Grade IV tumors over time. In general, these tumors tend to be slower growing initially, but can progressively become aggressive.

Patients with glioblastomas develop symptoms rapidly due to mass effect from the tumor itself or from the fluid surrounding the tumor (edema) that causes further brain swelling.

Glioblastoma can be difficult to treat since some cells may respond well to certain therapies and others may not. Because of this, the treatment plan for glioblastoma may combine several approaches.