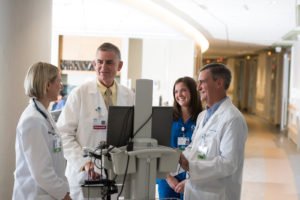 Non-Hodgkin Lymphoma (NHL) is a type of cancer that generally develops in the lymph nodes and lymphatic tissue found in organs such as the stomach, intestines or skin. In some cases, NHL involves bone marrow and blood. NHL isn’t just one disease. It’s a diverse group of blood cancers that all arise from lymphocytes (white blood cells that are part of the immune system). NHL has many different subtypes which are either indolent (slow growing) or aggressive (fast growing).

A cell undergoes a change (mutation) in a lymph node or in some other lymphatic structure. It can start in one of three major types of lymphocytes:

About 85-90 percent of NHL cases start in the B cells.

Treatment for Hodgkin lymphoma includes chemotherapy, radiation, plasmapheresis and, in some cases, watchful waiting. Stem cell transplantation is also a treatment option, as well as Chimeric Antigen Receptor (CAR) T-cell therapy, one of the most exciting and promising cancer treatment breakthroughs in recent years.

Symptoms depend on the area of the body is affected by the cancer and how fast it is growing. Symptoms may include:

Coughing or shortness of breath may occur if the cancer affects the thymus gland or lymph nodes in the chest, which may put pressure on the windpipe (trachea) or other airways. Some patients may have abdominal pain or swelling, which may lead to a loss of appetite, constipation, nausea, and vomiting. If the cancer affects cells in the brain, the person may have a headache, concentration problems, personality changes, or seizures.

If you experience any of the above symptoms, contact your doctor.

Your OHC doctor will help you determine the best care plan for you. Standard treatments for patients with non-Hodgkin lymphoma include:

Henry Picagli never expected to be sharing such a personal story with others, but after a near-death episode and a...

The Clinical Presentation of Lymphomas

Lymphomas, blood cell tumors that usually originate in lymphatic tissues (and can spread to other organs), are among the...