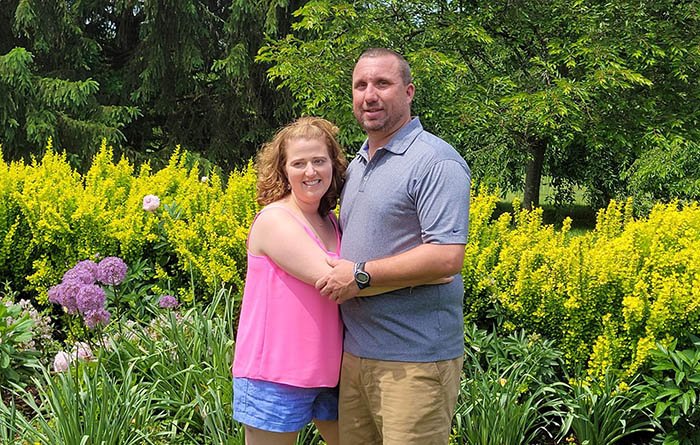 On June 7th, 34-year-old Amanda Toms received a revolutionary cancer treatment for multiple myeloma. As the only independent adult cancer practice in Ohio offering this treatment, OHC’s team of cellular therapy specialists, E. Randolph Broun, MD, James H. Essell, MD, Edward A. Faber, Jr., DO, MS, and Miguel Islas-Ohlmayer, MD, are bringing newfound hope to patients like Amanda with the recently approved Abecma, a CAR-T therapy. Amanda’s journey to this significant day has not been an easy one.

Young, newly married to her prince charming, and making a difference in the lives of children in her ideal job, Amanda was living her dream in the summer of 2017. Soon, things would take a turn. Amanda was only 31 when she began to experience debilitating pain in her left arm. “I had several imaging scans done, and the doctors couldn’t find anything,” said Amanda. Eventually, a neurologist diagnosed her with a nerve condition.

During the holidays, Amanda experienced tingling in her fingers and legs and soon was unable to walk. On New Year’s Eve, she was admitted to the emergency room where she learned a tumor was compressing her spine and multiple myeloma was eroding the bone marrow in her arm. Her fight with cancer was only beginning.

Multiple myeloma is a difficult to treat blood cancer that presents with periods of remission and relapse. “Multiple myeloma patients often try many treatments that only work for a few months, while causing debilitating side effects,” said Dr. Faber. “New therapies and newer combinations are often continued indefinitely, taking ‘treatment free’ time away from patients.”

“I couldn’t walk and could no longer work,” said Amanda. “I was always a strong advocate for myself. I pushed the cancer out of my mind and focused on rehabilitation and walking again.”

Amanda found herself on a plane to Arizona to be near her mother and begin treatment and rehabilitation at the Mayo Clinic. While receiving oral and IV chemotherapy, she had intensive physical and occupational therapy. “I was definitely the youngest person in rehabilitation, by far,” said Amanda. “I made some friends because I spent so much time there.”

Amanda’s primary hematologist referred her to OHC’s Dr. Essell, a medical oncologist, hematologist, and blood and marrow transplant specialist. In June 2018, Amanda returned to Cincinnati for a stem cell transplant. After a three-month period of remission, Amanda relapsed. Dr. Essell quickly transitioned her to a regimen of chemotherapy and radiation.

“I was still doing physical therapy and occupational therapy three times a week and I couldn’t drive,” said Amanda. “My husband, family, and friends were a tremendous support and made sure I got to all of my appointments. We had to alter our home to accommodate my wheelchair.”

During the summer of 2019, Amanda began an aggressive regimen of chemotherapy as a result of cancer cells around her pericardium. Things began to look up as the chemotherapy was keeping her stable. “I started to drive and returned to work part time with the use of a cane in January of 2020,” said Amanda.

This past February, Amanda relapsed. “I was tired and short of breath,” noted Amanda. Her cancer began to involve her eye and colon. She was treated with radiation in February and March.

“Because of my aggressive disease, I also met with doctors at Sloan Kettering, but decided Dr. Essell was the right choice because of his expertise and years of experience,” said Amanda.

March 27, 2021 is a day Amanda will never forget. The promising therapy she had been seeking out for her multiple myeloma received FDA approval. Abecma is the first CAR T-cell therapy for adults with relapsed/refractory multiple myeloma. For more information on this therapy, read OHC’s recent blog: https://www.ohcare.com/promising-car-t-therapy-for-multiple-myeloma/.

“My doctors kept telling me that CAR-T was for me,” said Amanda. “My family and I have constantly been checking for FDA approval.”

Dr. Essell directed Amanda’s Abecma infusion at Mercy Health – Cincinnati Cancer and Cellular Therapy Center at The Jewish Hospital, one of only four sites in the state to infuse a multiple myeloma patient with this new treatment. “Providing our patients with the most advanced treatment options is our goal, and we are pleased to bring this new treatment option to multiple myeloma patients in our region,” said Dr. Essell.

A determined optimist, Amanda remains hopeful for a positive outcome. “The care I’ve received at OHC has been phenomenal,” she said. “I’m completely confident in OHC giving me this new treatment.”

“We hope to give Amanda back her quality of life,” said Dr. Essell. “Patients in the Abecma clinical trial responded to therapy in as little as one month after the infusion. During remission, they don’t need any other multiple myeloma treatment.”

Anyone can support Amanda’s fundraising efforts for The Leukemia & Lymphoma Society’s 2021 Cincinnati Man & Woman of the Year campaign. Through this campaign she hopes to help improve the outcomes for patients with blood cancer. Please follow this link before the close of the campaign on June 12th: MWOYCincy21.givesmart.com.

OHC cancer experts were the first—and are the most experienced—adult cancer practice in the region to offer the ground-breaking CAR T-cell therapy, ushering in a new era in cancer treatment. At present, the group has 13 multiple myeloma patients ready to receive Abecma. OHC will continue to offer patients the most innovative and promising treatments to help them beat their cancer.

For more information about CAR-T and OHC’s team of cellular therapy experts, or to request a second opinion, visit ohcare.com or call 1-888-649-4800.

Picture, top: Amanda and her husband Harrison, visit the place where they were married—French Park in Cincinnati, Ohio.

Most of us can remember playing with a dump truck as a child. There was something so satisfying about loading it up with...

"Blanket Lady" Uses Hobby to Provide Comfort to Others

Thoughtful is one way to describe Gail Theile of Maineville, Ohio. Retired from her 27-year career in real estate, she...